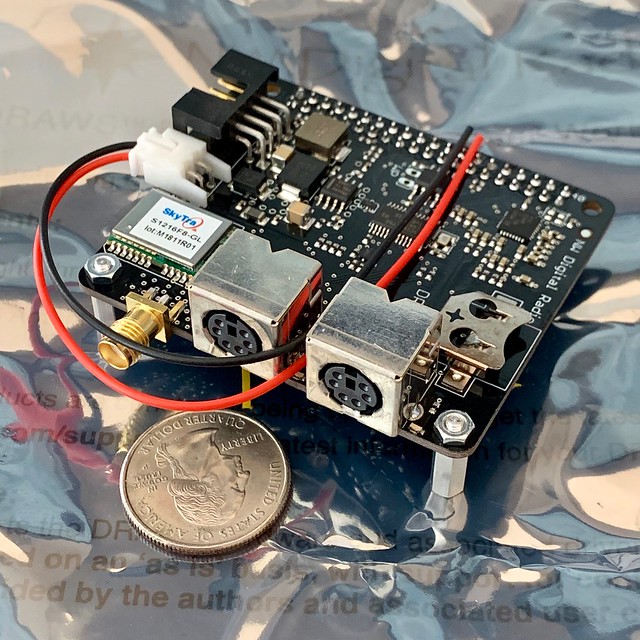 DRAWS when used with a Raspberry Pi 3B + becomes a single board hardware solution that puts several components  together for complete hardware solution for just about any amateur radio project.  The DRAWS Pi HAT board has a performance sound chip (CODEC), a GPS with pulse per second (PPS) (SMA connector)  that includes a battery backed real-time clock (RTC) and a 12v DC power circuit to power the board and the Pi from a single power source.   External ports on the board include 2 mini DIN-6 (PC Keyboard) audio sockets that match the “TNC” specs found on many radios designed for HAM Radio, an SMA connector for a GPS LNA antenna, 12v power connection and a GPIO array for additional I/O functions.

So what can be done with this combo?  Think:  Any functions in the realm of packet amateur/HAM radio like Direwolf modem, AX.25, APRS along with other digital modes like FLDIGI, WSJT-X, FT8 and digital voice (D-STAR, etc).  Since there is on-board GPS it can also function as a Stratum 1 timeserver providing GPS location services and time sync for other network resources.   Additional DRAWS info from NW Digital Radio site: http://nwdigitalradio.com/draws/   Support and more is done via Groups.io Subscribe to their sub-group at:  https://nw-digital-radio.groups.io/g/udrc

Initial Setup was easy using a “published”  Compass Raspberry Pi image, there will be a pre-built image soon from NW Digital.  I had the on-board GPS up and working in no time with all the goodies a Raspberry Pi has including VNC over WiFi for easy over-the-IP-Network access.